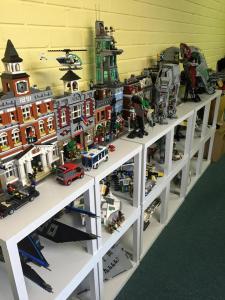 Seeing Darth’s TIE Fighter in Kmart in 2008 was the catalyst for Neil S. to return to LEGO as an adult. Since then he has become an avid collector and has displayed at events across Australia and in other countries.

Neil describes his storage method as “pretty random”. Some parts are stored by colour first then by brick type but smaller pieces are grouped by type then colour. This suits his building style.

He believes one of the best things about being an AFOL is meeting other AFOLs and seeing their creations – it’s amazing what other people can create from their own imagination. He also enjoys creating his own models and, like most AFOLs, appreciates the positive feedback from other LEGO fans.

Neil’s least favourite thing about being an AFOL is probably sorting through all of the little bits and pieces. He also dislikes it when people take the hobby too seriously and forget that it’s meant to be about fun and creativity.