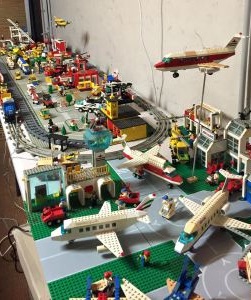 Russell K of Canberra has only lived in Australia for a couple of years. Whilst living in New Zealand in the 1990s he was well known for creating elaborate interactive LEGO displays with his kids. They had an extensive collection and it was his son’s enthusiasm for LEGO in the early 1990s that first lead him into becoming an AFOL.

For a variety of reasons, Russell’s LEGO was boxed up and placed in storage for a number of years and has only recently been unpacked. Unpacking his collection has been a mixture of delight, to find lost treasures, and sadness, to see how the collection has fared.

Russell has most of his sets on display in his garage in a massive 1990s town display. He has found modern sets to be frustrating as, though they are often lovely builds, they are not the same scale as the bulk of his older LEGO. His spare parts are currently in open plastic tubs sorted by colour. He had yet to unpack his Technic sets and has some concerns about their condition after 15 years in storage.

The favourite thing about being an AFOL for Russell is the range of online resources and the LUG communities that didn’t exist when he was an AFOL the first time around. It also pleases him greatly that the LEGO company are far more supportive of LEGO fans these days compared to the 1990s when he tried to create a fan group in New Zealand.

His least favourite thing is realising just how many sets he missed out on between 2000 and 2015. There’s a lot of catching up to do!

Join 386 other subscribers
Follow The Brick Room Blog on WordPress.com