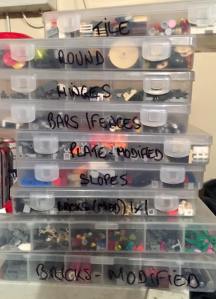 In terms of storage, Steve  describes his methodology as “organised chaos”. He uses shelving, drawers and filing cabinets in his garage for a large portion of his collection. Used parts are sorted by type and are stored in about 30 plastic crates. Unsorted parts are stored in plastic containers and his Bricklink shop parts are in old LEGO plastic tubs.

Steve is really impressed by the variety and quality of LEGO parts and sets these days. As a big fan of the early history of LEGO and he finds it incredible that 1950s LEGO bricks are still compatible with today’s bricks. He also really enjoys the fantastic LEGO fan shows conducted by AFOLs especially the enjoyment it brings everyone from volunteers and organisers to members of the public. As an AFOL, Steve greatly appreciates the support LEGO provides to the LUGs and LEGO fan events.

The quality of LEGO packaging is a concern of Steve’s and he believes they can go some way yet to make improvements in this area. His other least favourite thing about being an AFOL is all of the people on the various forums that have nothing better to do than make complaints.